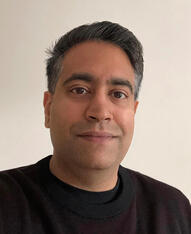 Parthive was born and raised near Chicago, IL, USA.

After obtaining his B.A. in Chemistry from the University of Chicago, he attended graduate school at the University of California, Los Angeles (UCLA), where he obtained his Ph.D. in Molecular Biology. During his doctoral thesis work, he discovered a novel regulator of Target of Rapamycin (TOR) signaling and cellular growth. TOR signalling promotes cellular growth and is negatively regulated by the GTPase activating protein, Tuberous Sclerosis Complex 2 (TSC2). But how TSC2 inhibits TOR activity was unknown. He showed that the small GTPase Rheb can promote cell growth through TOR signalling (Journal of Cell Science, 2003), thus providing this crucial link. Rheb is yet the foremost, direct positive regulator of TOR and is relevant to many diseases such as cancer, obesity and diabetes.

After obtaining his Ph.D., he was an American Cancer Society postdoctoral fellow with Dr. Bruce Edgar initially at the Fred Hutchinson Cancer Research Center in Seattle, USA and then at the Center for Molecular Biology, University of Heidelberg (ZMBH) and the German Cancer Research Center (DKFZ) in Heidelberg, Germany. During his postdoc, he first showed that adult fly intestines can regenerate through intestinal stem cell (ISC) divisions (Jiang et al., 2009, Cell). This work helped establish this model to study adult epithelial regeneration. He then showed that various stresses cause intestinal enterocytes to produce reactive oxygen species via NADPH Oxidase that cause enterocytes via p38 signalling to produce mitogens that promote ISC-mediated regeneration (Nature Communications, 2019). As p38 is also required for mammalian intestinal regeneration, this work indicates how and where damage activates p38 in the intestine. This work is highly relevant to pathological conditions with chronic intestinal damage such as inflammatory bowel diseases.

In 2019, Parthive moved to the University of Bristol to start his own lab as an Elizabeth Blackwell Institute Early Career Fellow. In 2020, Parthive was awarded a Sir Henry Dale Fellowship by the Wellcome Trust and the Royal Society.
Powered by

Create your own unique website with customizable templates.
UA-162980619-1